This forums is for questions, answers, and discussion about First Edition rules, formats, and expansions.
Reply

#544290
Ladies, gentlemen, and non-binary friends... let's get ready to rumble! It's time for March Madness 2021. In this friendly game, we vote on matches each week, eliminating options until we have a single winner. The game is named for the NCAA Collect Basketball tournament every year, from which we also stole the bracket structure.

This is the third year we've done this. In 2019, we voted on the sixty-four (64) most popular cards, where the original Q's Tent emerged victorious over Alternate Universe Door. Last year, it was a brawl between the most popular personnel cards, with Dr. McCoy winning over Seven of Nine in the final.

But now it's 2021, and we're doing something a little different. This year you aren't voting on a winning card. You're voting on the winning story to turn into a card! That's right, in March Madness 2021, you'll be weeding sixty-four (64) potential personnel, ships, dilemmas, missions, and more down to a single champion. And that champion will enter design and become a real live First Edition card! I hope you're excited, because I'm excited!

How Does This Work?
The game will run for six (6) weeks, so in spite of the name, it will actually be finished in April. Each week, one or more polls go up in which you'll be invited to vote on winning card ideas. For example, in Week 1, there will be four (4) polls, each with eight (8) matches. You can vote in any of the brackets you like. All of the voting is done via Google Forms, and all you need to participate is an email address.

You might be asking why you need an email address. Well, that's because we're offering prizes! Each time you vote - up to ten (10) possible times - you'll be entered into a drawing for a First Edition borderless promo. These are amazing cards with art by Lucas Thompson (edgeofhearing) and our fabulous Art Team, and we'll be giving out three (3) of them at the end of this game. Each bracket in which you vote is an entry - so vote often to maximize your chances to win!

What Are the Brackets?
The sixty-four (64) cards have been divided into four (4) brackets, each one drawn from a single source series. You'll be voting on cards from The Next Generation, Deep Space Nine, Voyager, and Enterprise. I only had four brackets, so I chose to exclude The Original Series and the Movies, because they just had a ton of new cards and are about to have a ton of new cards, respectively. This means the final four card ideas will be a series showdown!

Within each series, we chose sixteen (16) cards. Twelve (12) of the cards come from three (3) different underrepresented episodes. That's an episode of the show that has almost no cards in the game from it, or where there is a lot more potential than we have. For each episode picked, there are multiple card ideas in the bracket. The other four (4) cards are random single card ideas from various other episodes.

For example, the three (3) episodes picked for the Voyager bracket are "Non Sequitur", "Distant Origin", and "Workforce". Each of those episodes has four (4) cards in that side of the bracket, and then there are four (4) other, unrelated cards to fill it out. Each bracket was seeded to create interesting match-ups, with a variety of card types and card concepts represented.

We'll officially kick off the voting for March Madness 2021 on Wednesday, March 3rd. Tomorrow, I'll post a preview of the card ideas you'll see in the brackets, along with links to each card idea on Memory Alpha. In the mean time, please reply to this thread with any questions you might have.

#544454
I updated the top post with the info about how this game will work this year. Let me know what you think!

#544596
Here are the options that will appear in the brackets when the votes go live tomorrow. Please note that while some of these are obvious card types - like the missions, personnel, and ships - others have lots of room for interpretation. These are listed in no particular order:

From "Lonely Among Us": From "The Vengeance Factor": From "Final Mission": From other sources: Deep Space Nine

From "The Visitor": From "Waltz": From "Inquisition": From other sources: Voyager

From "Non Sequitur": From "Distant Origin": From "Workforce: From other sources: Enterprise

From "Terra Nova": From "Carbon Creek": From "Exile": From other sources:

I am shocked that this works in the forum. Ugly af, but... didn't crash anything.

Mod Edit [Boffo97]: Removed special characters at management's request as the post was causing an error.


I'll be honest Lucas, I 100% picked this episode because of you.

Mod Edit [Boffo97]: Removed special characters at management's request as the post was causing an error.

I have an irrational hatred of that episode and will be voting against it.

Basically, I saw TNG initially first run via video tape recorded from a friend after the season aired (that's right, I binged watched before it was cool). This friend accidentally put the episode at the front of 4 tapes in a row. So when I wanted to watch that season as a kid I had to 1. See ugly pale green again. 2. Get mad. 3. Spend 10 minutes fast forwarding. 4. Curse Yuta. 5. Then years later play trek ccg and curse Yuta some more....

1. Doing my actual job -- the one I am salaried for
2. Scoring the new episode of Starship Excelsior
3. Writing the April agenda for the Rules Committee
4. Responding to various posts and emails I have open in half a dozen tabs
5. Making a ridiculous bracket for this.

Guess which one I did? 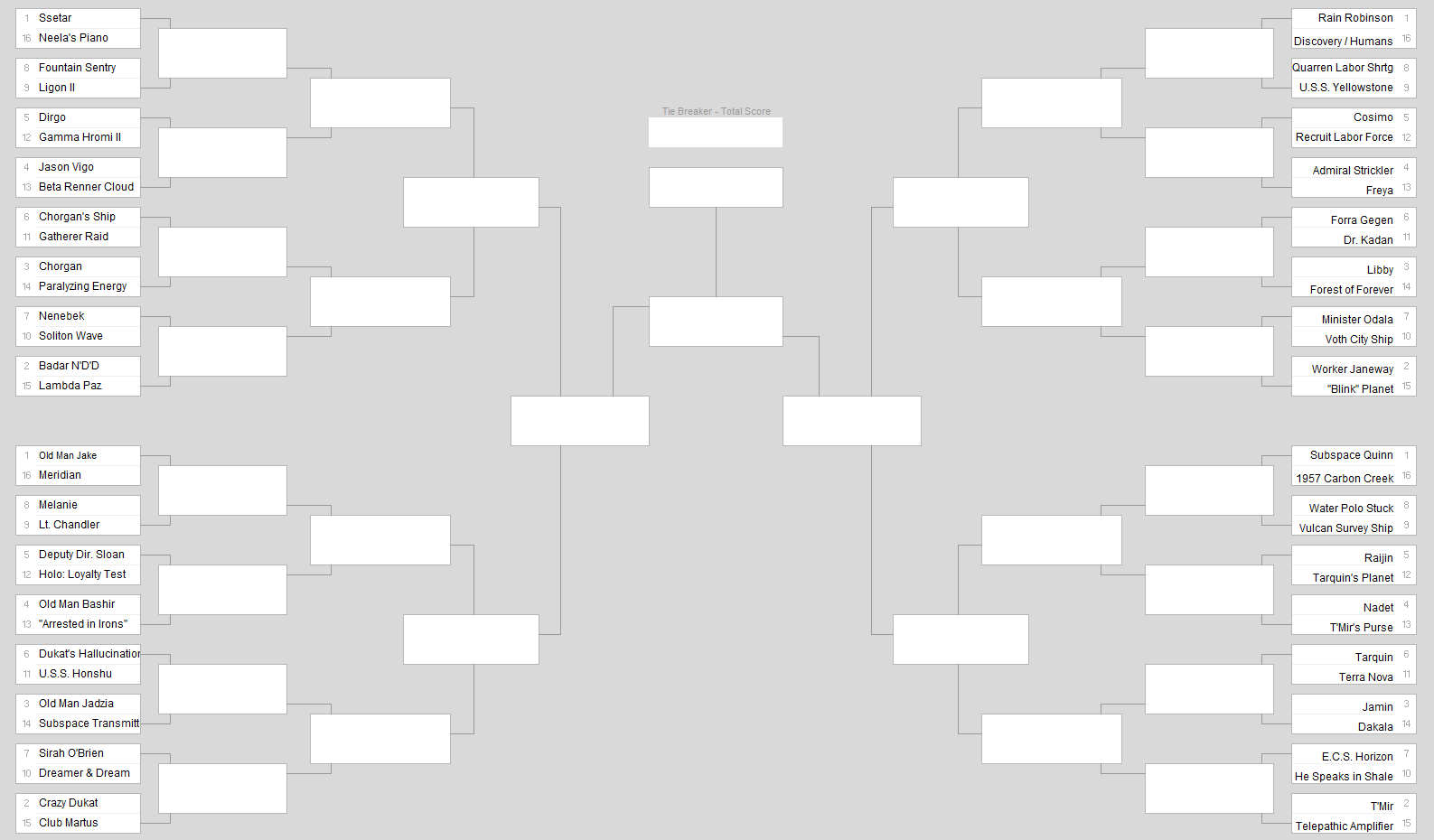 Power rankings entirely my own and often reflect what I think the community likes, not what I like. (Rain Robinson would be a 12 seed if I had my way.)

Feel free to use a copy to track the matches!

EDIT: This is now updated to reflect the actual seeding by Iron Prime!
Rules Manager | Official Rulings in blue. All else opinion. | Rules Archive

#544634
It's interesting to see how you seeded it versus how it was seeded.

Tomorrow will be exciting!

PS: Next time you want to make an actual bracket, PM me first.

#544635
I didn't want to be the "fun was detected" guy (again), but apparently the special characters to add, shall we say, eldritch effects to the text of YES in some messages in this thread was causing an error, even if it wasn't visible to end users.

So, sorry, but I had to clean it up. Feel free to hurl produce at me.

Boffo97 wrote:The questions and the answers are mutually exclusive. If both are known, it's speculated that 1E will instantly disappear and be replaced by something even more bizarre and inexplicable.

If I'd wanted to make an actual bracket, absolutely!

As it was, I just wanted to procrastinate every other thing on my to-do list, and PM'ing you would have meant I had no excuse to do that in the meantime. So I made a ridiculous bracket instead.

Still, I hope its avowedly ridiculous existence didn't step on your toes in any way. I'm looking forward to learning the actual pairings tomorrow.
Rules Manager | Official Rulings in blue. All else opinion. | Rules Archive

While I am anxious that this exercise will just give me quantitative evidence of how little the 1E community is interested in the Gatherers, the gesture is nevertheless greatly appreciated.


JeBuS wrote:I am shocked that this works in the forum. Ugly af, but... didn't crash

It's not like there aren't target-rich episodes to choose from...

It's Wednesday! We're more than halfway through th[…]

Happy birthday to my homie, @MrVorlon ! I hope […]