THEMATIC CHALLENGE V19 03: THE NEVERENDING STORY
Inspired by the latest release Qpid this month's thematic challenge is all about stories, book, and literature in general. This could be a character from a book which was seen or mentioned on screen like for example Robin Hood from the episode Qpid or Hamlet because Jean-Luc Picard shows and mentions The Globe Illustrated Shakespeare which contains all works. But you do not limit yourself to Human literature, Klingons and Romulans have also some impressive amount of literature. You can find a list of books that were seen on screen on Memory Alpha.
Create a Star Trek CCG card from a piece of literature that was seen or mentioned on screen in any movie or series.

(1) The Never-Ending Sacrifice
To play this event, you must command a

personnel who has Officer or Intelligence. Plays in your core. At the start of your turn, place the top card of your deck under this event. If there are seven cards under this event, destroy it and draw seven cards (your events may play for free this turn).

"There's more to life than duty to the state..."
"When it comes to art you're obviously a prisoner of Federaton dogma and human prejudice!" 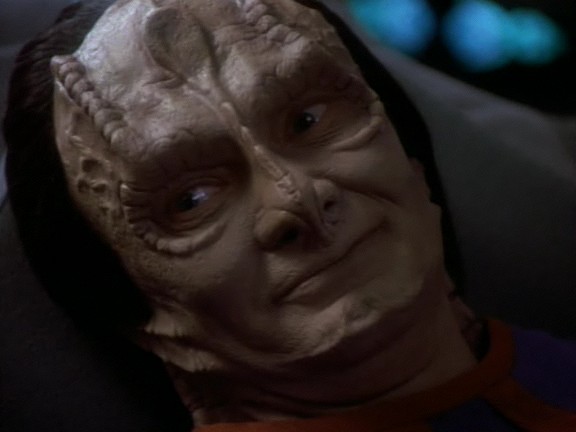 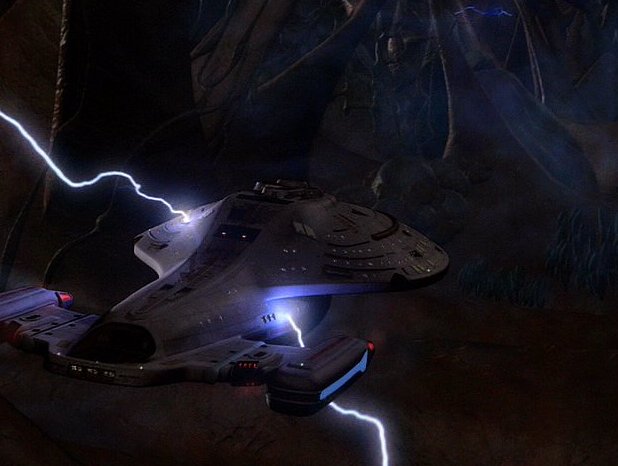 200,000 year-old, space-dwelling lifeform that feasted on starships' antimatter. Hunted for 39 years by an obsessed Qatai.
End of every turn: Moves to next location and destroys any ship without Empathy x2 OR Anti-Matter Pod. When reaches end of spaceline, turns around and heads back in opposite direction.

Picard and Dathon at El-Adrel {Star Trek: The Next Generation}
In 2368 the Tamarian Dathon sacrified his life to establish first contact with the Federation of Planets. Dathon's sacrifice and Picard's experiences were remembered as a new "word" in the Tamarian language. [Countdown:3]
Opponent may download to this location one Tamarian personnel who joins your mission attempt. Cannot get past unless 3 Diplomacy OR 3 Honor present. If any Tamarian dies at this location, opponent scores points and place dilemma on this mission; it cannot be attempted or scouted. [10]
Last edited by Pazuzu on Thu Mar 21, 2019 3:54 pm, edited 3 times in total.
"Seize the time... Live now. Make now always the most precious time. Now will never come again." (Jean-Luc Picard, The Inner Light)

(0) •Shevok'tah gish
Plays on your Boreth or Defiant-class ship. Klingons you own gain Anthropology. When you solve this mission, place a Klingon in your discard pile aboard your ship here.
Klingon opera that foretells the return of Kahless. Favorite of Worf.
NastyNateTV on YouTube and Twitch. 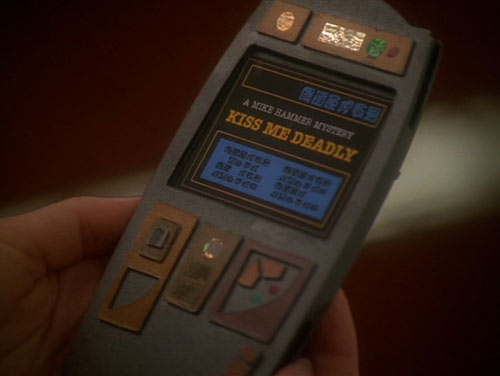 Lore: The crime novels of Earth native Mike Spillane appealed to Odo's interest in justice. He was introduced to the stories by Miles O'Brien.
Text: During a mission attempt, if you have SECURITY, you may meet one additional SECURITY requirement here. If you do, you may discard this to score points. (Not cumulative.) [5] Holographic representation of the Shakespearean character. Soldier under Henry V. Bears a passing resemblance to Jean-Luc Picard, but nobody comments.

Notes: For many years I thought this was in fact Picard playing the role in the scene in The Defector... Made the it a little confusing on the rewatch! In fact Patrick Stewart, due to his love of Shakespeare, requested he play one of the holograms as well, and so does double duty here.

(3) •Freya, Shield maiden
Hologram
•Anthropology •2 Honor •Security
When your unique hologram personnel present is about to be killed by a dilemma or in combat, you may kill this personnel to prevent that.
"My lord, my time has come."
INT 7 CUN 5 STR 7

A lot of good arguments are spoiled by some fool who knows what he is talking about. ~ MIGUEL DE UNAMUNO (1864-1936)

It is better to fail in originality than to succeed in imitation. ~ HERMAN MELVILLE (1819-1891)

#457407
It seems that this month's thematic challenge is not very well received. I am truely sorry for that. If you are still undeceided or un-inpsired I would like to remind you that you still have a little more than a week for your submission. Then, a new thematic challenge will start.
"Seize the time... Live now. Make now always the most precious time. Now will never come again." (Jean-Luc Picard, The Inner Light)

Kosst Amojan
Plays on your Kai; gains Treachery x2 and [Nem, 1>. All other

cards in play and all Bajoran Wormholes in play into your point area (move ships at Bajoran Wormhole to an adjacent location, or discard if none) (5 points per card).
Commodore Matt Decker
Job: Testing

Pazuzu wrote:It seems that this month's thematic challenge is not very well received. I am truely sorry for that. If you are still undeceided or un-inpsired I would like to remind you that you still have a little more than a week for your submission. Then, a new thematic challenge will start.

Number of entries vary greatly, so don't worry about it.

#458081
Thanks everyone for your wonderful entries! For anyone else interested, you have five more days to come up with an idea

Pazuzu wrote:It seems that this month's thematic challenge is not very well received. I am truely sorry for that. If you are still undeceided or un-inpsired I would like to remind you that you still have a little more than a week for your submission. Then, a new thematic challenge will start.

I'm always a last minute kind of guy, so hopefully I can get my entry in later today or this weekend.
"I wish you hadn't done that." Literary legend Samuel Clemens shamelessly enlisted young author Jack London to get the truth that was out there.

When two famous authors become part of the Trek story, how can they NOT be an entry into a literary based dream card contest?

bhosp wrote:Haha Neil's the Hillary Clinton of Star Trek. He won the popular vote even though no one really likes him, but he still loses.

Human
Anthropology, Diplomacy, Honor, Law, Officer, Security
When this personnel uses a skill to overcome a dilemma or solve a mission, choose an event. Opponent's cards cannot destroy that event until the start of your next turn.
"Sometimes it almost seemed too real."
Integrity 8 Cunning 6 Strength 6
"I wish you hadn't done that."

Charlie and I are aiming for this weekend for our […]

I mean, it wouldn't necessarily be canon if we d[…]