1EFQ - How important is "Star Power" for affiliations

This forums is for questions, answers, and discussion about First Edition rules, formats, and expansions.
Reply

covers the entire United Earth society) is also justifiable, for similar reasons. You can make either fit the available facts reasonably well.

The only people who could settle the question of what the intention was are, ultimately, Decipher designers circa 2006. Clearly, CC Design has picked an interpretation in the years since, and I think it's a reasonable one.

I therefore don't think Paxton or Samuels are "wrong," although I could buy an argument that Paxton should be dual-

like Tallera.
Rules Manager | Official Rulings in blue. All else opinion. | Rules Archive

because she was a mercenary.

EHCCGPP wrote:Only in this game is nuking whales from orbit considered a completely legitimate strategy.

because she was a mercenary.

It doesn't actually make any sense for her to be

. She never worked with the Romulans. She just used the fact that Romulans and Vulcans have near identical biology to help her cover story. Even

doesn't make a lot of sense, given that other Vulcans who do not support the Federation (such as Sakonna and Sybok) are non-aligned. I think she got triple affiliation primarily because they wanted something visually distinct for the Fajo's Collection.

As for Starfleet, I believe Decipher always intended it to encompass all of United Earth, not just "Starfleet." I believe they called it "Starfleet" because that's the name more people would recognize (keeping in mind that Enterprise was still ongoing when they were designing the first Starfleet cards for 2E), but that they wanted to include all of Starfleet's support systems as well. For example, Decipher made 1E-compatible MACOs, and MACOs are technically not Starfleet. Terra Prime is a bit iffier, but even with them Decipher has historically put dissidents in the affiliation they are dissenting against. I could see an argument for

, but not really for straight

Soong, on the other hand, wasn't supporting or dissenting against United Earth. He was doing his own thing, and probably should be straight up

. The only reason I see to make him

is that he is human. Granted, "I'm the right species" is enough for most affiliations, but it doesn't tend to apply to

(outside of the big three),

.
"Save your strength. There'll be another time. The princess - you have to take care of her. You hear me?" -Han Solo to Chewbacca, ESB

Armus wrote: ↑Sun May 15, 2022 8:49 am I think like most things, there isn't one answer. Some of the "off-color star power" cards made sense thematically, some were necessary for gameplay balance, and others were just kind of WTF?

Examples off the top of my head:

;
Janeway - great addition for both theme and gameplay

but I get that he's the best Medical for a

deck so I'll let it slide on gameplay necessity.

:
Prisoner Archer
Prisoner McCoy
Prisoner Martia - sensing a theme? (though this one isn't AS egregious)
Arik Soong - shouldn't have been

Also, agree with the idea that stat power is a bit more nuanced than just "the shows' main casts."

#577498
If you don't like them, don't use them. But if the CC never make these cards, then we never get them, and that robs people like me who do like them and use them. It's not like we're pulling them out of packs we bought with money anymore. So chill out, relax, and have fun with it. And that reminds me, when do we get a boutique set with the many different minds of Seven of Nine from Infinite Regress? 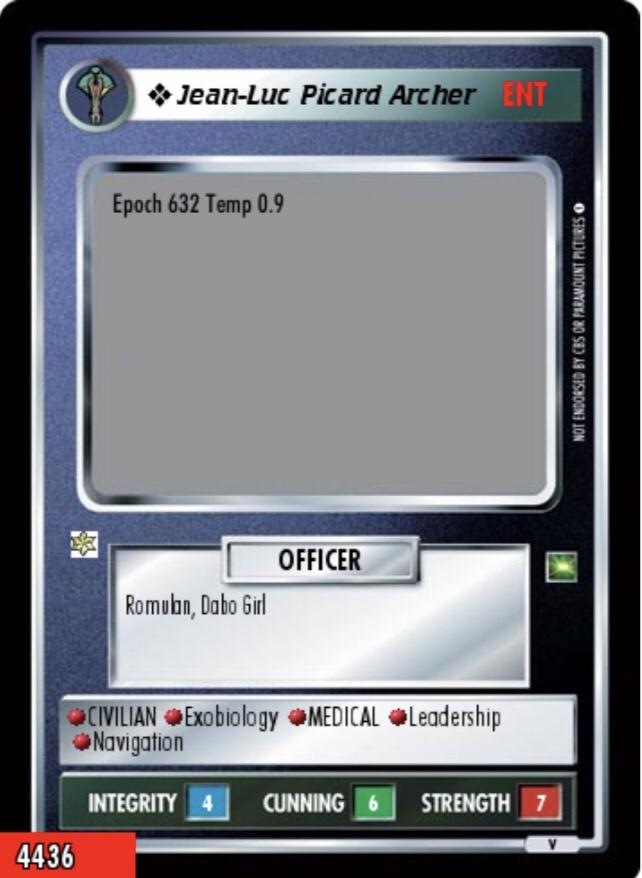 enabrantain wrote: ↑Sat May 21, 2022 12:22 pm If you don't like them, don't use them. But if the CC never make these cards, then we never get them, and that robs people like me who do like them and use them. It's not like we're pulling them out of packs we bought with money anymore. So chill out, relax, and have fun with it.

People are responding to the originally posed question, and no one is saying they do or don't use them, just that we don't necessarily agree with the design logic.

enabrantain wrote: ↑Sat May 21, 2022 12:22 pm If you don't like them, don't use them. But if the CC never make these cards, then we never get them, and that robs people like me who do like them and use them.

The problem with that is that the.. "Fed guest stars" often end up *also* being among the strongest personnel in the faction either by flavor - "bridge crew always get tons of skills" or by Design using them as an excuse to sneak in skills the faction is weak in.

Old examples of this are The Trois getting Empathy into Ferengi, or Data and Picard being one of the few six-skill Romulans. If I'm playing Romulans, Data and Picard shouldn't be up there in my top-tier selections.
What deck should you play next?
Join the CC Discord channel!

Fezzik wrote:Why do you wear a mask? Were you burned by acid, or something like that?

Westley wrote:Oh no. It's just that they're terribly comfortable. I think everyone will be wearing them in the future.

Ops isn't the perceft example, there are /images/[…]

Sorry everyone but due to recent scheduling confli[…]

To stick an oar in, and starting with "rememb[…]